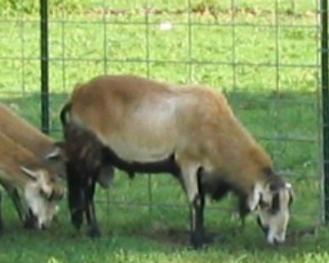 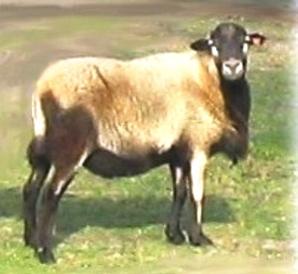 In September of 2007, we sold Amram to Mary Swindell.  Mary then bred Amram to three ewes from the Virginia State University (VSU) line to continue what is known as the Hatley line.  We had sold Zorro, so we continued to use Ramses as our flock sire only with the ewes Show Me 2 and Show Off 2.  We refer to that bloodline as the Arkansas line. We test bred Caribe to be sure she didn't carry any white, then we began breeding her to Arkansas rams without blending her progeny with the pure Arkansas line.  We kept the Arkansas line pure by using Show Me 2 and Show Off 2 exclusively with Arkansas rams without crossing another line into it until Show Me 2 and Ramses died.

Later, we purchased several rams from the VSU line to include in our breeding program, but the Arkansas bloodline was the beginning of the Lone Star line.  Since 1996, we have been out crossing, inbreeding and line breeding to create the Lone Star line, but we cannot forget that the Arkansas line and also the Bellwether line gave us an incredible start to finding our own way in the world of Barbados Blackbelly sheep.

We bred #10 Promise and #12 Glory several times only to realize they were producing scurred rams consistently, no matter to which ram they were bred.  We made the decision to cull those two ewes and continue on with only Show Me 2 and Show Off 2.  We used Amram for breeding as much as we could, until we had a line of ewes to breed back to Ramses and Zorro.

Two years later, on May 31, 2006, Josh Weimar had a dispersal sale, so Mike went to Missouri to see what was available.  We purchased two ewes, Caribe VSU and Red Shanks VSU and a ram with only a number, that we named St. Elsewhere VSU.  Later we learned that St. Elsewhere was a son of Saint Phillip.  At that time, no one knew the significance of the "Saint" rams, meaning Saint Phillip, Saint Lucy and Saint Michael who went on to make their mark on this breed.  St. Elsewhere was sold for slaughter due to his large scurs that he passed on to his son, Harper, who was also butchered.  While at the Weimar farm, Mike noted several rams running with the flock of ewes.  He also noticed a young ram lamb that had potential, but was not certain to which ewe he belonged.  After returning home, Mike called Mary Swindell to let her know about the young ram.  He told her he suspected the lamb, approximately four months old, belonged to Caribe because, although apparently weaned, he had stayed close to her while Mike was there.  He assumed the sire was #13 Calvin for the simple reason that he had seen St. Elsewhere mount a ewe only to be promptly knocked out of the way by a much larger #13 Calvin, who proceeded to breed the ewe himself.  Mary and Elaine Haas went to Josh's farm and got the young ram, along with #13 Calvin and #20 Gloria, mentioned earlier.  After Elaine got blood samples from #13 Calvin and we sent Caribe's hair sample to her, she was able to have DNA testing done at the University of California, Davis to establish that the ram Elaine named Bailey was indeed the son of Caribe VSU and #13 Calvin. 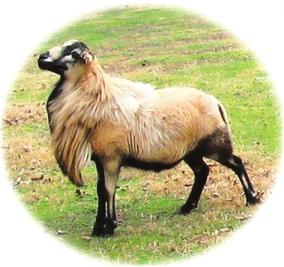 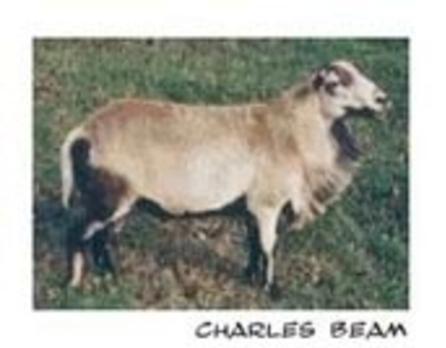 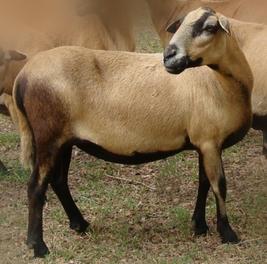 How this bloodline came to be.

The image above was sent to me in the late 1990s by Mark Fleming, the acting Secretary/Registrar of the Barbados Blackbelly Sheep Association International (BBSAI) at that time.  The BBSAI shows this photo in their records listed as Eric, Hershey's sire.  Truth be known, there was so much confusion at that time trying to get the Barbados Blackbelly separated from the American Blackbelly and trying to find how many polled rams were actually available in the United States, I'm not sure that anyone actually knows which ram the picture really portrays.  My bet would be that it is Hershey, simply because the photo has Charles Beam's name on it and he bred Hershey, which is obvious by his registration number.  Rev. Beam did not breed Eric as is plainly seen by Eric's number.

Hershey was an integral part of the Arkansas bloodline in our lifetime.  Having a goal of producing hornless sheep in a polled breed that had failed miserably after several discouraging attempts, we decided to try a new direction.  We contacted Tina Hatley in Dyer, Arkansas to see if she would be interested in selling some of her breeding stock.  She informed us that she had just sold everything she had available to Josh Weimar, the President of the BBSAI, and he would be driving down from Missouri to pick them up over the coming Memorial Day weekend.  That was in May of 2004.  In those days, breeders were trying to scrape together enough sheep to keep the breed going as they tried one thing after another to weed out horns, horn buds, scurs, wool, white markings or crowns, black smudges and a small stature.  There was even an occasional ewe with horn buds, so you can imagine the difficulty in finding stock that was not plagued with those faults.

Josh Weimar's purchase consisted of a ram, #13, later named #13 Calvin by Elaine Haas, after she purchased the ram along with a ewe, #20, from Josh, that she named Gloria (not to be confused with #12 Glory).  The ewes that Josh purchased were #20 as mentioned, Echo, Razzle Dazzle and a very dark ewe named Grandma.

We were disappointed to realize we had missed out on the purchase.  Nevertheless, Mike continued to visit with Tina over the phone trying to learn all we could about that bloodline. Apparently, the way it started, Charles R. Beam of Oklahoma, past President and one of the Barbados Blackbelly Sheep Association International (BBSAI) founders, had gifted two ewes to the Hatley's daughters to exhibit at fairs.  The two ewes, out of Millie CRB019408 and sired by Eric EDS019719P, were aptly named Show Me 1 and Show Me 2.  Tina recognized the ewes' qualities and to insure they would be bred correctly, returned to Charles Beam to purchase a ram.  That ram, Hershey, sired animals that have left their mark on the history of this breed and are still sought after in pedigrees today.

The longer Mike and Tina talked, the more they both recognized the dedication that each had toward the conservation of the Barbados Blackbelly.  Mike was relating to Tina how much we admired the qualities of our ram, Zorro.  Tina asked about Zorro's breeding and upon learning that he was sired by Nutrageous, exclaimed, "I bred that ram".  Nutrageous was one of the "candy" rams sired by Hershey and bred by Tina.  They were Nutrageous, Whatchamacallit and Heath.  There were two others, Fudge and Kisses bred by Charles Beam during the time he owned Hershey.  After all the reminiscing was done, Tina confided that she had kept a few choice ewes and rams for herself, and if her daughters were agreeable, she might sell them to us.  We waited for two days on pins and needles and finally got Tina's call.  The girls were willing to sell the sheep so they would have money for a horse.  We were elated!

Mike wanted to see what the sheep that Josh Weimar was buying looked like, so he would have a good recollection of what the Arkansas sheep's physical traits were.  He asked Tina if he could pick his sheep up the day before Josh would arrive.  Mike arrived at the Hatley farm on May 29, 2004 to transport ram #316 and ram #318 (half brothers sired by #13 Calvin),  Show Me 1 and Show Me 2, #19 (Show Me 2's daughter by Hershey), and three other ewes sired by Hershey out of stock bought at a Texas auction.  Back then, it was hard to find pure Barbados Blackbelly ewes.  Tina had friends, who raised Katahdin sheep, that were going to an auction in Texas and she asked them to be on the lookout for BB ewe prospects.  They found what they believed to be purebred ewes, then bred them to homozygous polled Katahdin rams to verify that they were polled.  Out of that group  purchased at the auction, we brought home #10 and #11 (twins out of Grandma, the dark ewe purchased by Josh), and #12 sired by Hershey out of Madison, who came from the auction.  We were also slated to get #17 out of Show Me 1 and Hershey.  Unfortunately, she was lost to the gene pool after being kicked by a horse and unable to recover.

After we got the Arkansas sheep home and were able to sort through pedigrees, we named ram #316, Amram and #318, Ramses.  Show Me 2's daughter, #19, became Show Off 2, and numbers 10, 11 and 12 we named Promise, Hope and Glory respectively.  Amram's dam, #11 Hope, died in our barn on a very cold Christmas Day 2004 after being treated for pneumonia and its complications for almost three weeks.  It was heartbreaking to lose her after we had already lost Show Me 1 just weeks after bringing her home.