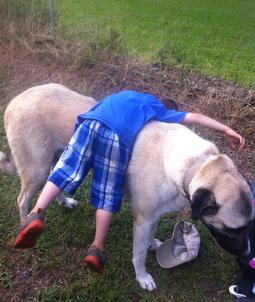 This is one of my favorite pictures of Swatty guarding up close and personal. 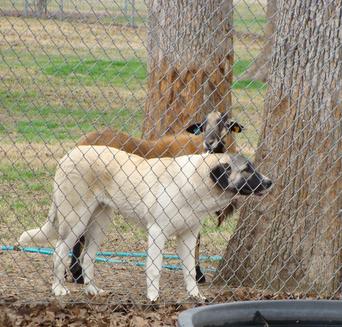 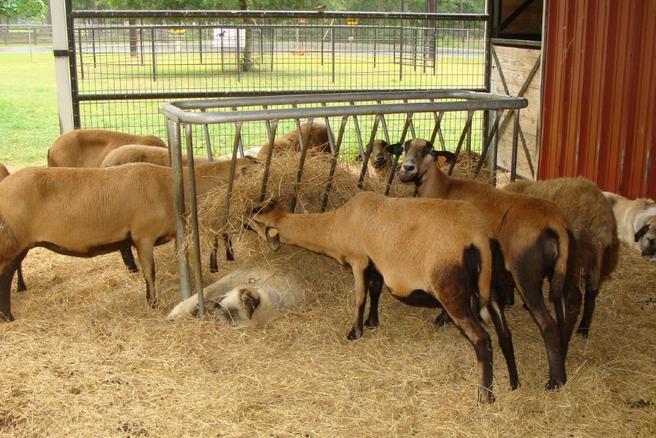 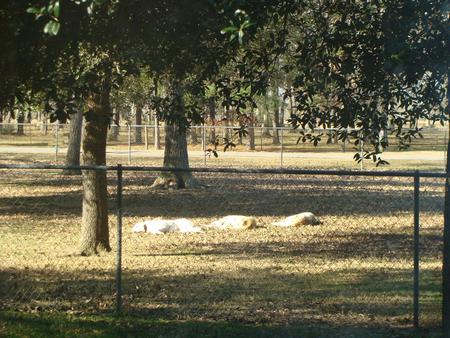 Below are S.W.A.T. (affectionately known as Swatty) and Ninja. They are both Anatolians, as well as brother and sister. Since they are not registered, and we want to raise registered dogs, we had Ninja neutered and Swatty spayed. All of our dogs are microchipped. The two of them come from our friend and Anatolian breeder, Lyn Brown, of La Plata, New Mexico. Swatty takes care of  ewes and their lambs, while Ninja guards the pregnant ewes.  They are both very good chicken guards as well, they even guard the eggs which is quite comical to watch. 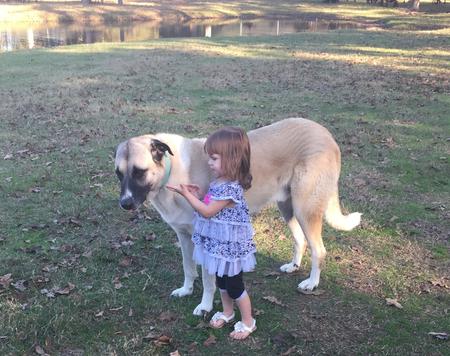 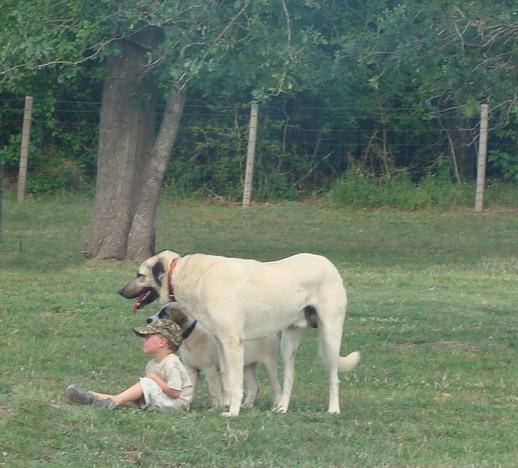 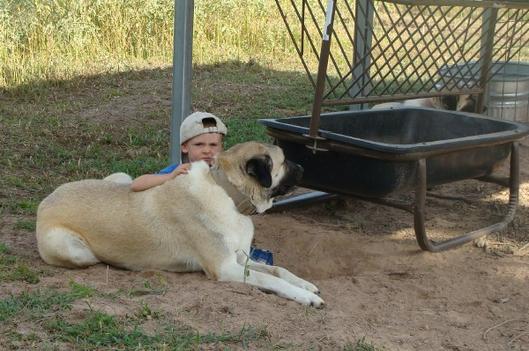 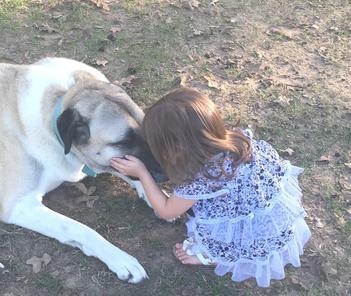 There are many different breeds of LGDs.  We happen to prefer the Anatolian Shepherd Dogs.  They seem to fit the bill for our farm, our flock and the job requirements  to be met here at Lone Star Farm.  Livestock Guarding Dogs are just what their name implies. They guard, they do not herd or bring in the flocks.  They simply live with the flock 24/7 and keep them from harm from four-legged predators.  The Anatolian is one of the breeds that will also keep the flock from being stolen by two-legged predators.  As a precaution, we do not allow visitors in the pastures without being accompanied by Mike or myself.  It's safer that way. However, it doesn't matter what age child it is, as long as they are well behaved, our dogs love them.  They are gentle with children and take on the responsibility of protecting them, as soon as they are introduced. 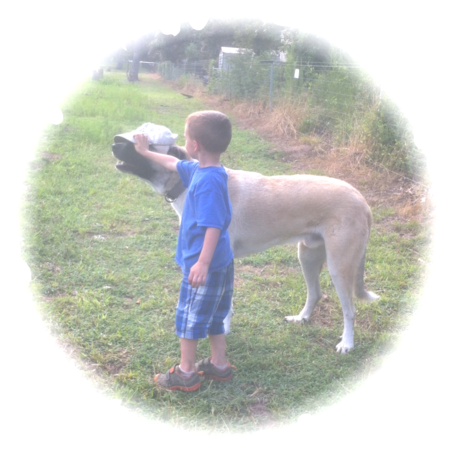 Swatty is a very happy dog most of the time. Right now she is seriously grieving the loss of her brother and friend?    Ninja squeezed under the fence last week and has not returned.  He is/was a devoted guardian and despite our efforts to find him, we did not.  We heard a loud gunshot ring out that morning and our guess is that he was shot by our neighbor who has little concern for how valuable he was or how loved he was by all of us.  He will be terribly missed.

As they do their work, you come to respect their decisions about the flock. 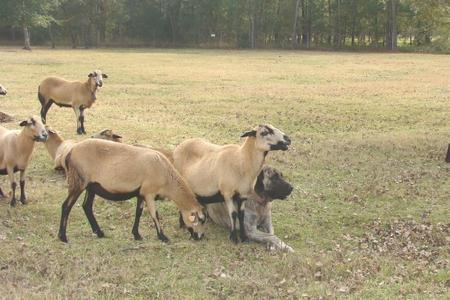 Bedia (pronounced bu dee' uh) is Mike's pride and joy.  She has passed her medical tests for breeding requirements through the Orthopedic Foundation for Animals (OFA) with a rating of "GOOD" on her hips, and a grade of "NORMAL" on her elbows and thyroid. She will be bred the next time she comes into season, provided we have enough buyers interested in the pups.  Bedia is an excellent guardian. She is in charge of the pregnant ewes and does an excellent job of not taking any guff off them, but she is also their buddy.

She is a ferocious guard, though you wouldn't believe it unless you saw her in action because she is such a sweety.  She loves everybody when she is introduced.  Bedia is our largest Anatolian, but very fast and agile.  With her brindle coloring and the way she practices her stealth, she's an  uncanny protector.  You can look out over her pasture for five minutes and swear there is no dog in there with those sheep.  Then out she comes from her hiding place and you would be in serious trouble if you had already jumped the fence.

Swatty after a hard night of guarding. Busy night. 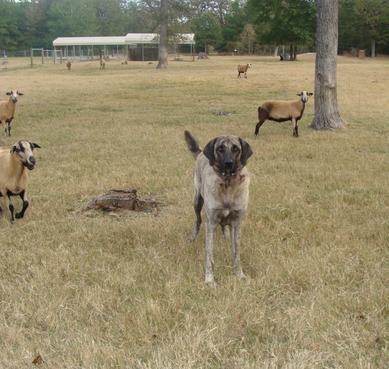 The dogs get to know each animal in their charge individually, be it sheep, goats, chickens, or whatever.  Although they guard the entire flock, it is interesting to see how they interact with each animal, becoming close friends with some, or steering clear of others who may be a bit surly toward them.  We currently have four Anatolians, and we witness this action from them on a daily basis.  Different dogs have different personalities and we are learning how to gauge which dog works best in each situation.  In our observations, it takes a dog with more experience, or one with a very gentle spirit to live with weanling lambs.  The lambs begin to play and run in the pasture and that action triggers prey drive in pups.  The pups then want to chase them.  The more they chase, the more panicked the lambs become.  It can spell disaster.  Some breeds may be different, but you cannot put an Anatolian puppy in with your sheep and expect it to do what it is supposed to do without supervision.  It takes patience and time training to make a good livestock guard out of an Anatolian, but when they finally have it, they are the best in their field as far as we are concerned.  Well worth the effort to train them.

Experienced dogs, or seasoned dogs, are generally adults at least two maybe three years old, who have lived with the flock and have made enough mistakes, having been corrected by either their shepherd or an older LGD,  that they have become steady observers of the sheep with no desire in them to chase the sheep.  Each dog on our farm seems to have found its niche in our little society.

Swatty with a ram friend.

This is three-year-old Brooklyn, explaining the agenda for the day.  Notice how intently Ninja is listening. 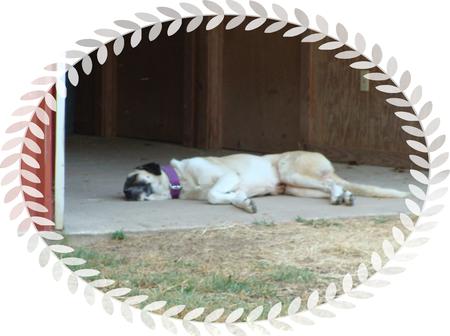 Axe, S.W.A.T. and Ninja after a hard days night.

One of Swatty's very best qualities, kissing babies.  If that was the only requirement, she could be mayor of a city.  She adores babies of any species. 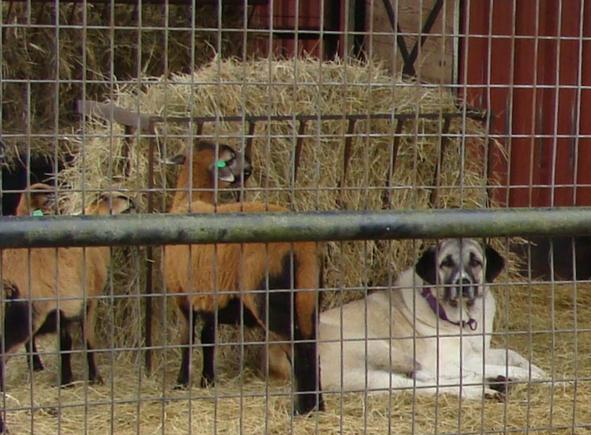 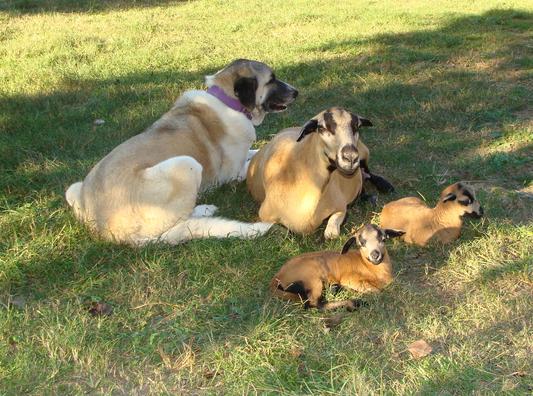 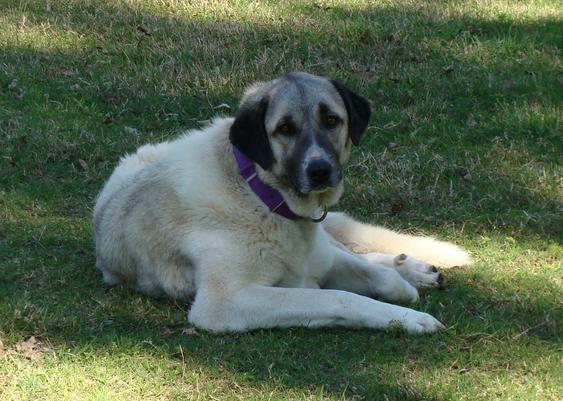 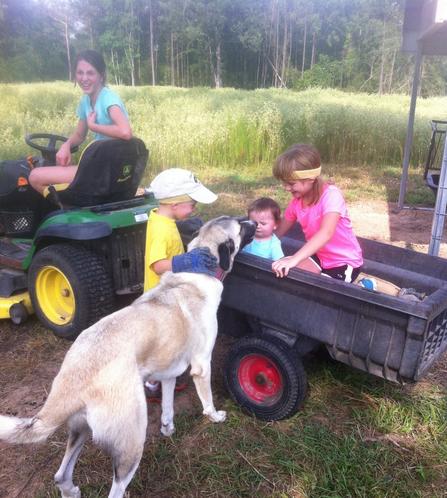 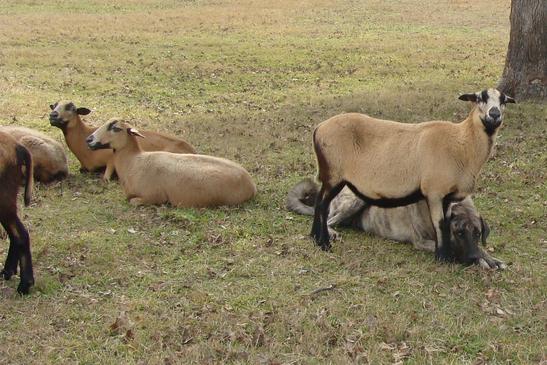 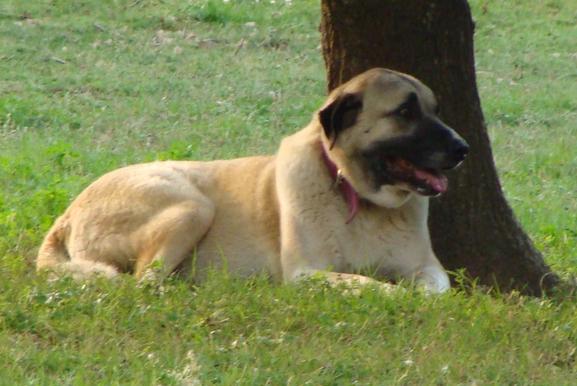 Ninja giving Brennan a ride and getting kisses from great granddaughter, Brooklyn.

This next picture is Bedia's idea of sheep sitting.  EZ Does It, the ewe standing over her, is her best friend.

The following picture just shows how much contact the dogs have with the sheep they are  in charge of.  Though they aren't easily visible, there are three Anatolians in the paddock with the sheep.

In this photo, Brennan thought Ninja was too hot, so he let him wear his hat. The favor seems to be appreciated.

Ninja and his best buddy, Brennan.