Her dam is Lone Star Gilda, a Gideon daughter that descends from Show Off II. Show Off II is Ruth's dam.  That  is the best word picture I can give you to explain why we linebreed.  We have been blessed with another Ruth. 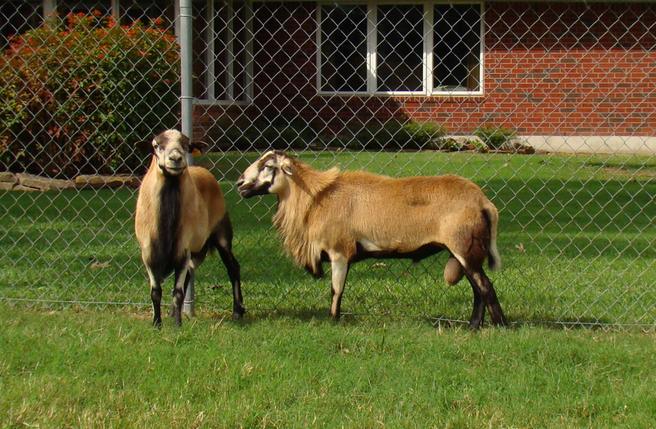 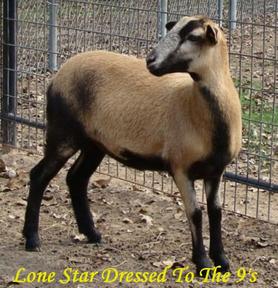 As astute observers of our website, I'm sure some of you have noticed that the pictures and pedigrees of some of our familiar breeding rams have been retired.  It was with much sadness in our hearts that we made the hard decision to euthanize Lone Star Boris Badenough, his brother, Lone Star Drago, Lone Star Gideon and Bellwether Horatio.  We reached that agonizing decision after watching these magnificent animals struggle with chronic breathing problems, an aftermath of the Texas wildfires.  After taking care of the priority emergencies and losing several ewes that were ready to lamb, and lambs that were on the ground during the fires, we noticed these four rams had runny noses and some difficulty breathing.  Texas A&M students immediately bathed them to remove fire retardant, (dropped from planes trying to get control of the fire), along with soot and smoke.  Hospitalized for tests, the rams had chest X-rays, endoscopic exams of their sinuses, throat cultures and biopsies of their nasal passages.  There was nothing to be done except injections of Banamine (a pain killer) and Dexamethasone as an anti-inflammatory (side effects were, hopefully, only temporary sterility).  Quite a blow when you are dealing with animals that are rare and used for breeding.

I cried out loud for what seemed like an hour after Mike called to tell me the sad news.

One day I happened to be walking through the pasture and I saw the ewe lamb pictured to the left.  Do you see the uncanny resemblance between the two of them?  I couldn't wait to check my records to see who her parents were. She was sired by none other than Lone Star Drago, Ruth's twin brother.

Show Me died from complications after lambing.  Sadly, we also lost her final contribution to our flock, a ewe lamb we named Lone Star Godiva, and her ram lamb, Lone Star Yancy.  What a tragic loss to our flock, and to myself and Mike personally.  We miss Show Me and her regal presence as lead sheep, affectionately referred to as Queen Mother, Mother Superior or aptly, The Boss.  She was a heritage ewe with social position that answered to no one, including the rams to whom she was bred.  Everything was orchestrated and executed according to her plans even during breeding, to our amazement and the confusion and bewilderment of many a young inexperienced ram.  During her reign, anything (be it equipment, a new stock tank, etc.), or any sheep, goose, duck, or chicken introduced, had to be perused by The Queen herself and knighted with the sword of her approval before the rest of the flock would bow to acceptance, as comical and sometimes frustrating as it was to her shepherds.  She was truly a lead ewe that would defend her lambs and her flock from predation with as much determination and tenacity as any ram we have ever witnessed.  She considered our Livestock Guarding Dogs as predators that were fair game and each one of them gave her a wide berth after being catapulted through the air as pups that, in her mind, had taken a wrong turn somewhere and needed to be taught a lesson.  To their dismay, it was a hard lesson learned.  Though a little rough on the guard dogs, they adjusted to her ways, but were never totally accepted by the rest of the sheep until after Show Me's passing. She made us proud to have such a responsible and reliable animal at the helm when the pups were still too young to tend to business.  There will never be another Show Me.  She was an original that has left her mark on the world of registered Barbados Blackbelly Sheep.  She is missed. 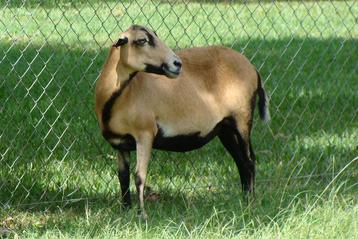 Reminiscing About Things Of The Past

Although we began raising Blackbelly sheep in 1996, it wasn't until February 10, 2005, after years of purchasing sheep and sorting through the characteristics we wanted to keep and those we were compelled to cull, that we felt like we had reaped the first fruits of our labor, breeding a great ram.  Lone Star Boris Badenough was born one night.  When we walked into the barn the next morning, we knew the moment we saw him that he was a specimen we would be proud to use to help save the Barbados Blackbelly breed.  He had the most magnificent head and we knew after we had checked him over that this was the direction we wanted to take our breeding efforts. His head and bulk  became Boris's trademark here on our farm.  Each time Boris sired a lamb, he stamped it with that beautiful head, beautiful to look at, with deep indentations, the best you could ever wish for in any polled breed.

We hadn't bred Boris for a time, because we were using other rams to diversify the genetics of our flock.  Then, when he was nine years old, we bred him to his granddaughter, Lone Star Gilda.  Once again, up popped two wonderfully linebred newborn rams with that same identical head.  Its time we paid tribute to Lone Star Boris Badenough.  He produced many fine offspring that will carry on his name here at Lone Star and at other farms that recognized the potential in his lambs. Congratulations to all of you who did.  Thank you to all who had confidence in our sheep, and their shepherds, to venture into this conservation effort with us.  I'm sorry to have to say that we had to euthanize Boris due to an ongoing health issue.  Some of them just don't live long enough. 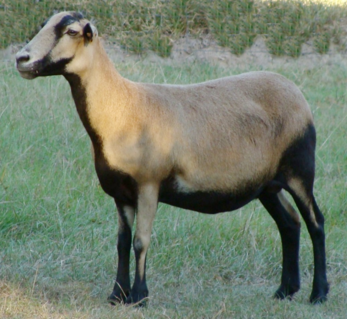 Another tragic loss was our beloved Lone Star Ruth, also lost during the chaotic wild fires.  Ruth was ready to lamb when she died, carrying what we supposed would be triplets.  We had such plans wrapped up in Ruth and her lambs that we were devastated when she died. We had been evacuated from our home for six days and the sheriffs' officers would only allow Mike to go home to feed our animals every other day with an escort to the farm because they were busy trying to prevent looting.

Another great animal that we lost is Show Me 2.  We didn't breed Show Me.  She was bred by Charles R. Beam and we purchased her from Tina Hatley of Arkansas, but we felt privileged to own her from May 29, 2004 until her death in the spring of 2011.  You get attached to animals when you have them that long, besides she was a personality extraordinaire.